At one point early on in Monday’s game between Lyons and Hinsdale Central, an official skated over to the Lions' bench and asked the coaching staff if the game carried some larger significance than just a typical regular-season league game.

“I said ‘why do you ask’?” Lyons coach Benjamin Engle said. “And he said ‘because you’re all wearing suits’.”

When the storm on the ice was over, Central had withstood several comebacks from Lyons to win 8-5 inside both teams’ home barn at the Willowbrook Ice Arena.

And a packed house got to see a wild IHSHL West battle on full display.

Leading the way offensively for Hinsdale Central was senior Zach Devine, who scored four goals and whose chief trait reflected the effort given all over the ice for three periods.

Coaches always talk about their team’s ‘compete level’ and both teams brought the thunder on Monday with a large contingency of student fans and parents looking on. Along with every player from both teams, Devine has never had a problem getting ‘up’ for the rivalry game between Central and LT.

“There’s just something about them,” Devine said of LT. “And the crowd tonight definitely helped. That’s why I play high school hockey. We play for the fans and it was great to see fans for both teams here.”

The game’s opening five minutes saw Lyons (6-5-1 in IHSHL West play) establish a presence in its attacking zone. Hinsdale Central (11-2-0) and goaltender Thomas Labno withstood LT’s pressure, then struck twice in a 30-second span on goals from Devine and Alexander Hadesman. Anthony Martirano assisted on Devine’s goal at the 11:21 mark and Hadesman scored unassisted at 10:51.

Hinsdale Central went up 3-0 on Devine’s unassisted shorthanded goal at 4:22 when he swooped in up the right side and scored from a tough angle on a defensive giveaway in the neutral zone.

“We work on that in practice, on those quick transitions, moving the puck, and really pushing the pace,” Anderson said, “and we got some scoring chances off of their mistakes.”

A solid start for Lyons was thus erased by Central’s three-goal outburst.

“We came out that first five minutes and had some opportunities, but Hinsdale Central is a talented team offensively and they got some odd-man breaks on us and they capitalized,” Engle said.

The Red Devils were clearly in the driver’s seat. But wait…

Lyons answered with a goal less than 30 seconds later to make it 3-1, when Maksymilian Washchuk scored on a shot from the point on the power play, with an assist to Blake Egan.

Lyons went on a 5-on-3 advantage and cut its deficit to 3-2 when Carter Storey scored the first of his two goals, at the 14:21 mark of the second period. Benjamin Ovnik assisted on Storey’s goal and then scored one of his own, unassisted at 9:23 of the second period, to tie the game at 3-3.

A 3-goal lead followed by a 3-goal comeback isn’t something a hockey fan sees every day, and Engle appreciated the grit his boys showed in making it happen.

“That’s maybe the first time in my coaching career I’ve seen us come back from a three-goal deficit,” Engle said. “I told them in the locker room that was one of the best games we’ve played in my history of coaching. Just to watch the camaraderie and the way they kept their heads and played smart hockey, and how they kept pushing when they were down. We’re not the most skilled team or the most talented but we do have heart. We don’t quit.”

Anderson was not surprised by the huge momentum swings that marked the game, or by Lyons’ comeback.

“We're always looking to kind of get the first goal and go from there, but I know the way LT is coached, they're not going to back down from anything,” Anderson said. “We know if you give them an inch they’ll take a mile. And they didn’t back down even though we had a three-goal lead.”

Central wasted little time regaining a lead. Martirano took a feed from the right corner from Pete Cook and buried it from the inside the top of the circle at 8:36 of the period. Central went up 5-3 at 5:57 on the power play when Devine completed a hat-trick on his shot from the high slot.

Lyons cut Central’s lead to 5-4 before the second period ended when Storey scored his second goal of the night at the 3:30 mark.

‘Barnburner’ is an overused cliche but a house packed with fans from both sides saw exactly that through two periods.

“We’re both competitive hockey teams that were just out there battling,” Engle said.

Central regained a two-goal lead on Devine’s fourth goal of the night, less than two minutes into the third period. Lyons cut it to 6-5 on a Thomas Rokicki goal at 7:54 before Cook scored on the power play at 5:39 and Martirano netted his second goal with 1:38 left in the game to end the day’s scoring.

“I like the way (Devine) played tonight and our seniors have really stepped up this year,” Anderson said. “You can tell it's a tight-knit group and with Hadesman, Devine, and (Sebastian) Dufort, they really bring a cornerstone of leadership.”

“We've been together for so long. When we were on the same team my freshman year on JV, we won the Illinois West regular season,” Devine said. “We’ve skated together for four years and our chemistry is off the charts. We’re a family out here.”

Not surprisingly, a game with four power-play goals scored reflected the emotion of a rivalry game, and penalties piled up both ways through three periods. Each teams’ head coach received a mandatory penalty once both teams reached the 12-penalty threshold.

And in a longstanding rivalry across all sports between the schools, Monday’s revolving doors on the penalty box likely surprised no one.

“We came into this game knowing it was going to be chippy and there would probably be a lot of penalties,” Devine said. “And the refs are just doing their job trying to make sure no one gets hurt.

“Our offense was dialed in to start the game and we kind of let them come back in it. But we always tell ourselves we’re a third-period team and we stayed confident. We’ll probably see them again but I’ve never lost to LT and that’s not going to change.”

Anderson applauded the play of all four of his lines, along with the play of goaltender Thomas Labno.

Central finished with a 25-23 edge in shots over LT, but the Lions kept Labno busy.

“I thought Labno played great. I know we gave up five goals but without him in net, they probably would have had a few extra,” Anderson said.

But it was Devine’s four-goal performance that highlighted the box score.

“He's a competitor who wants to win and he wants the puck on his stick,” Anderson said of Devine. “You want your best player to have the puck, especially a guy that wants it, too. He goes out and competes hard in practice and it shows in the game.”

Devine now has 12 goals in 13 West division games and leads the team with 28 points. He played with an edge throughout Monday’s win.

“I always have a chip on my shoulder,” Devine said. “I’ve always been a cocky player and I just try to back it up on the ice.”

Lyons also had its share of solid performances up and down the lineup.

“Obviously Carter Storey,” Engle said. “He’s our captain and he’s our leader. We’ve been running on him and Whit Proctor offensively. And Carter is a utility player for us. He was a defenseman for us last year and he asked to try forward for us. He did, it kind of stuck and he makes things happen out there.”

“I thought (Jacob) Santiago was good on the penalty kill and made some good decisions for us. He brought his ‘A’ game. I thought (Thomas) Rokicki had a good game, taking some big hits, but he was all over the ice. Defensively, we rely heavily on Jack Leach and Jake Fisher and I thought they played well, too.” 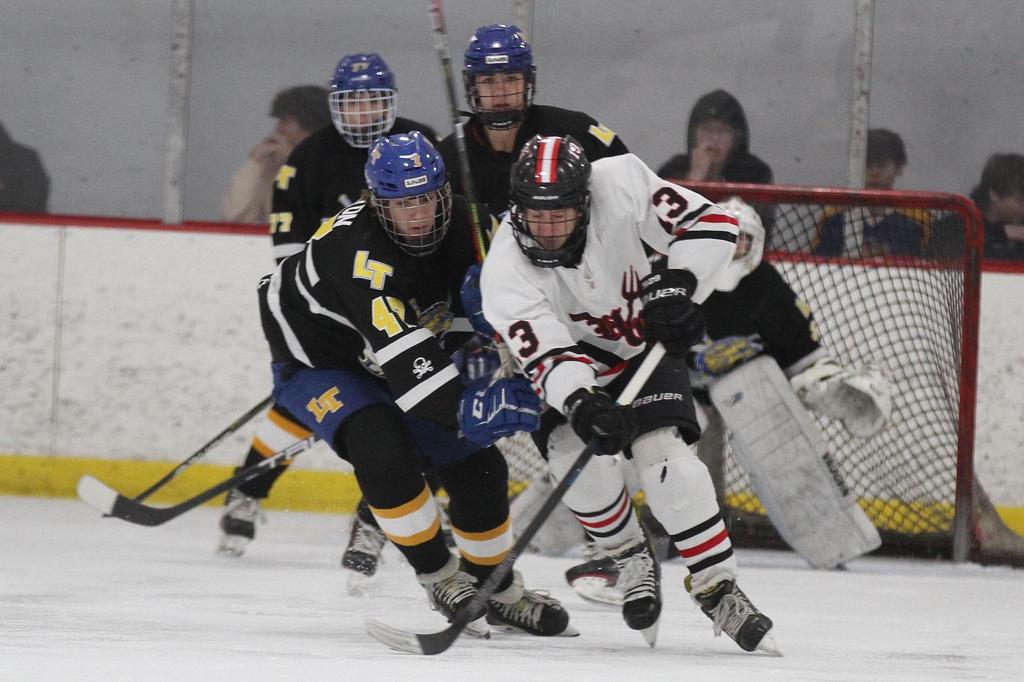 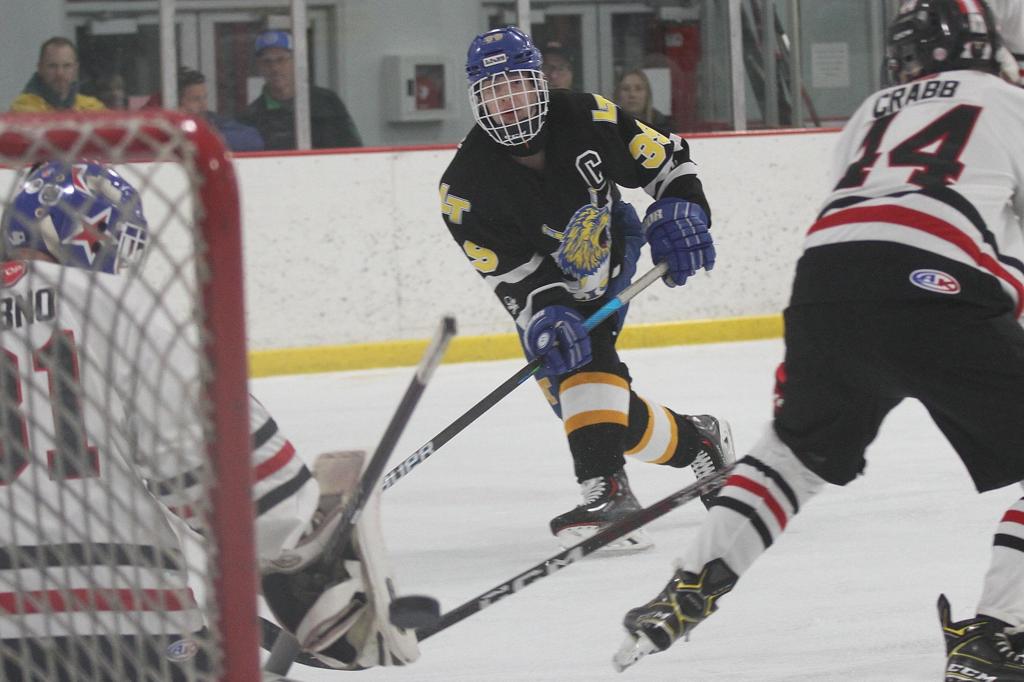 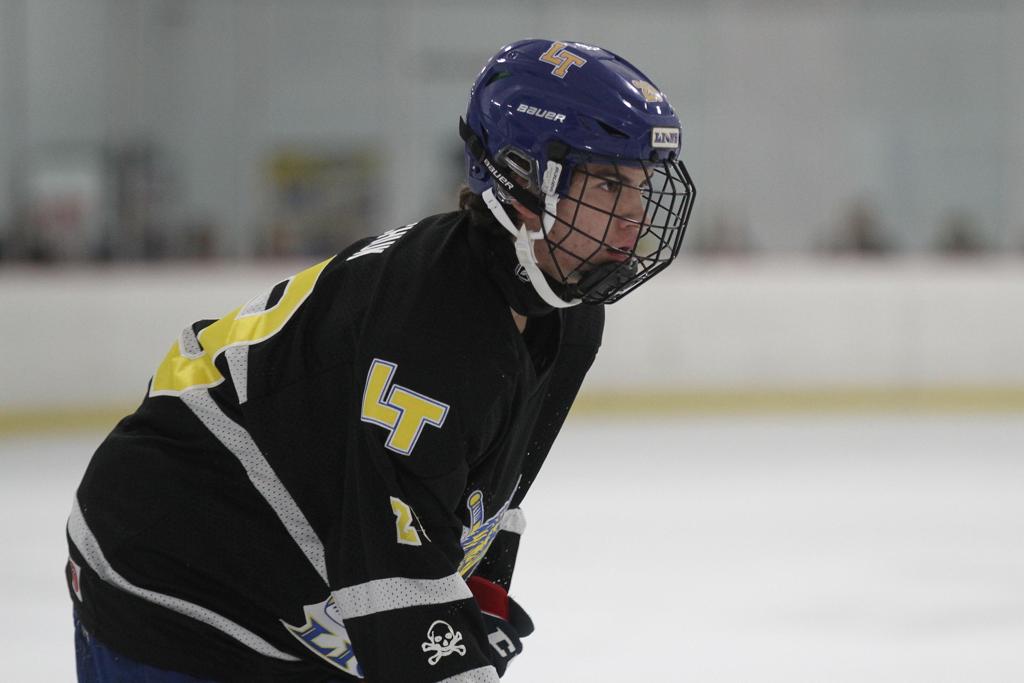 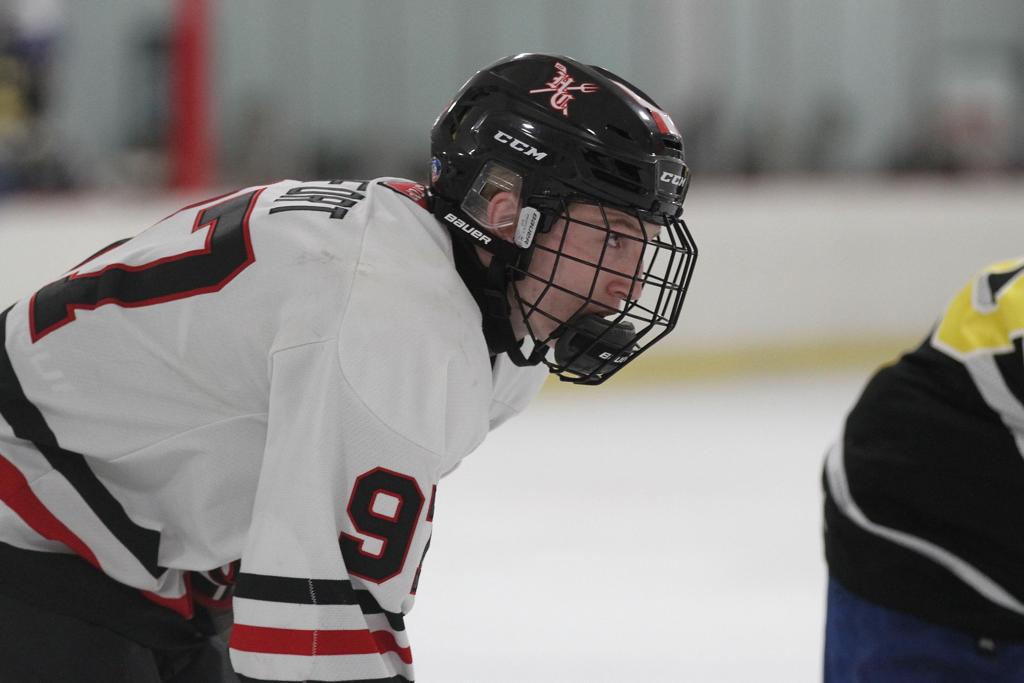 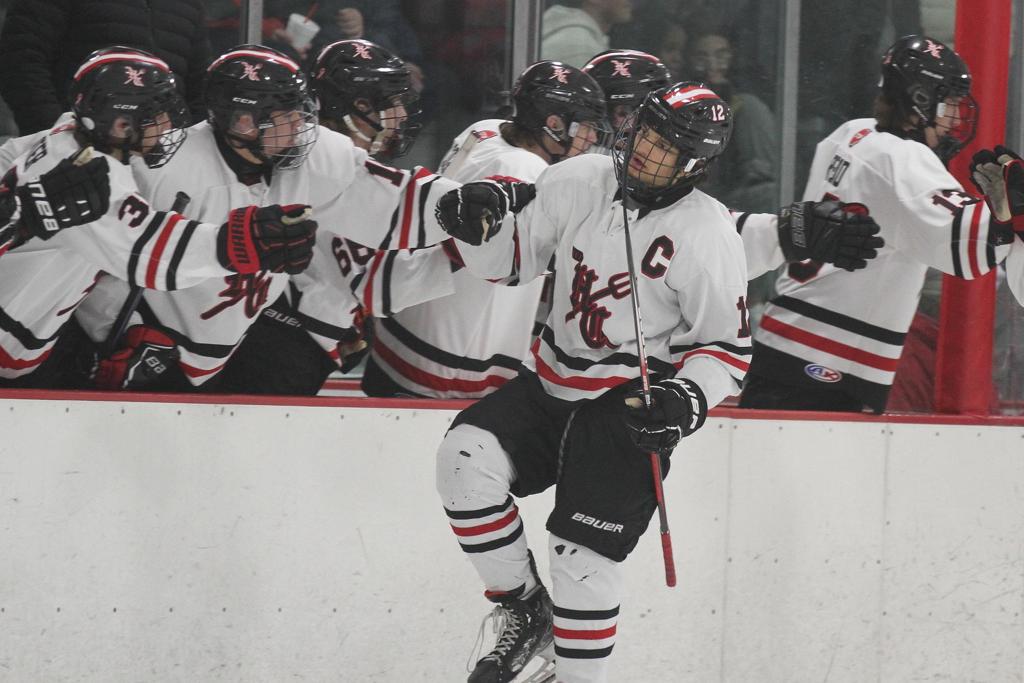 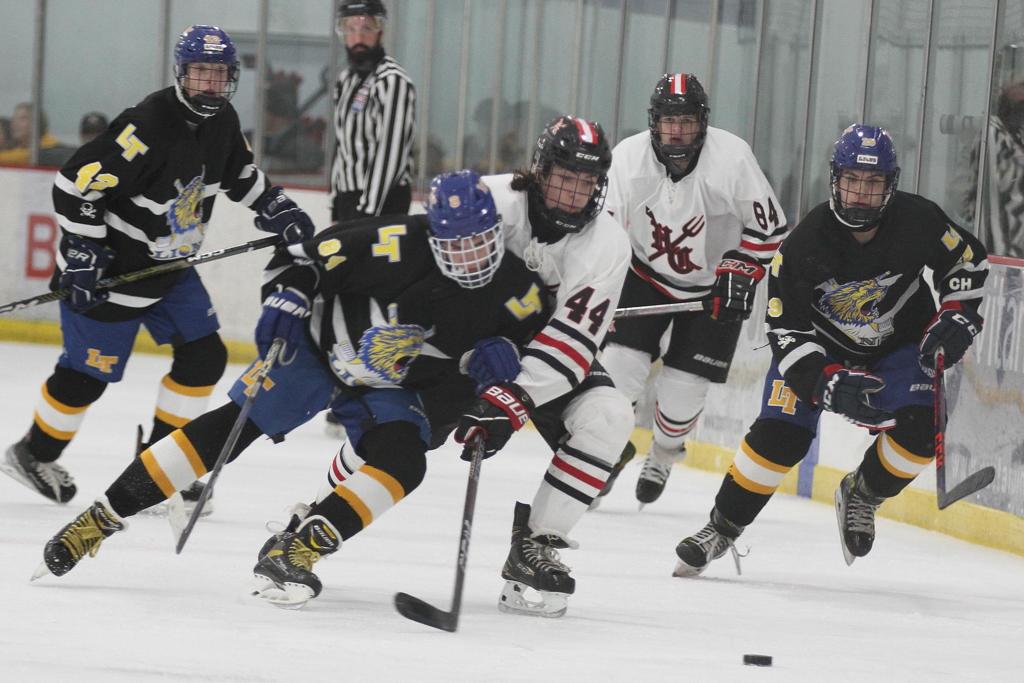 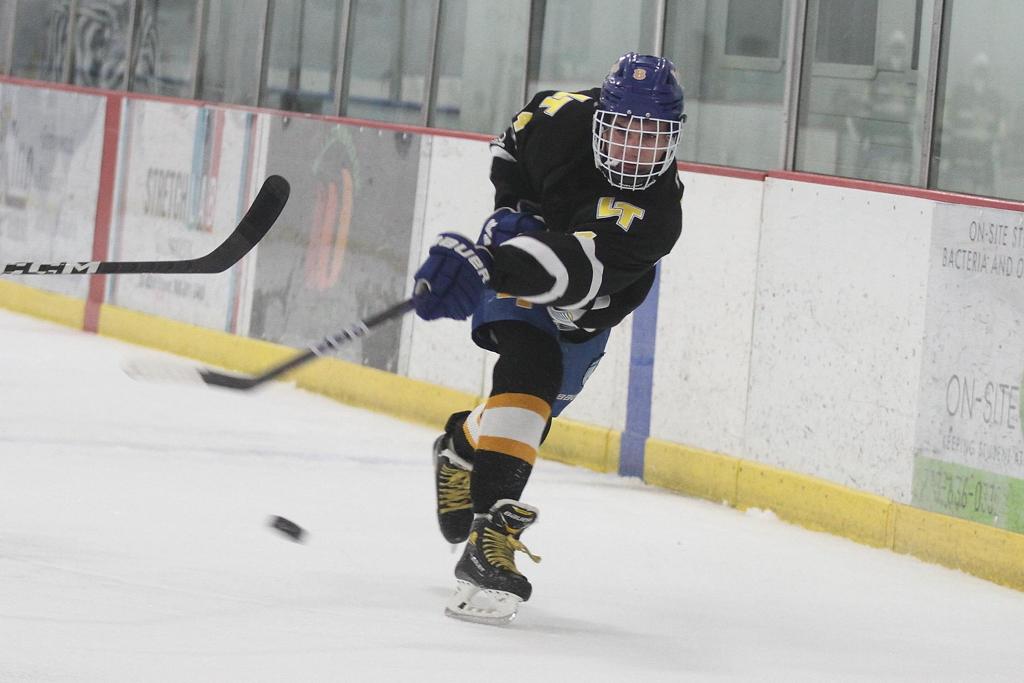 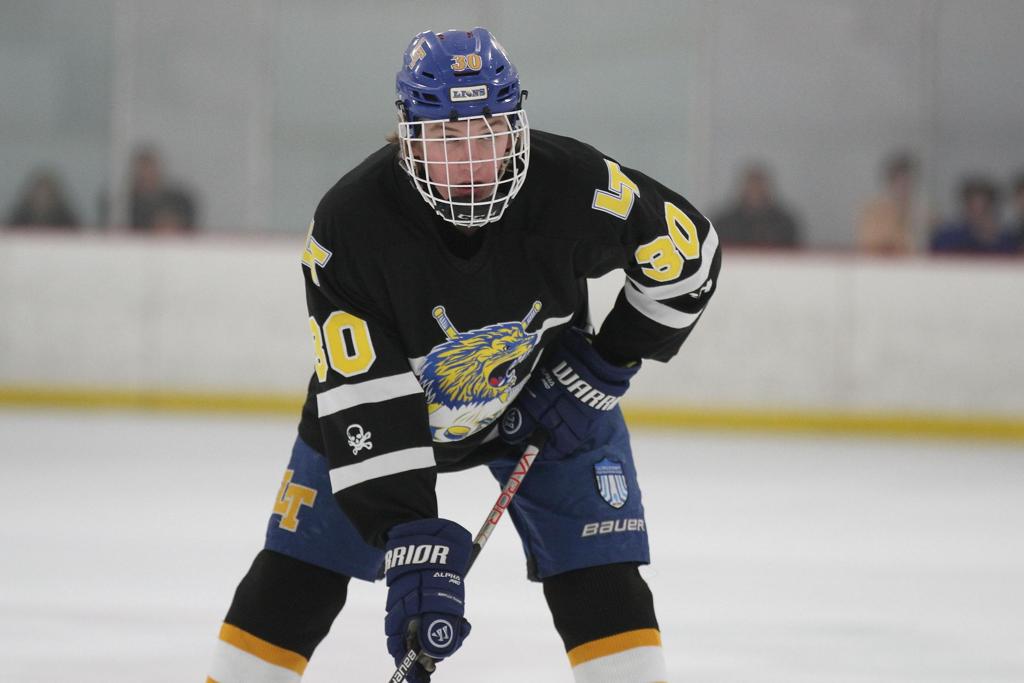 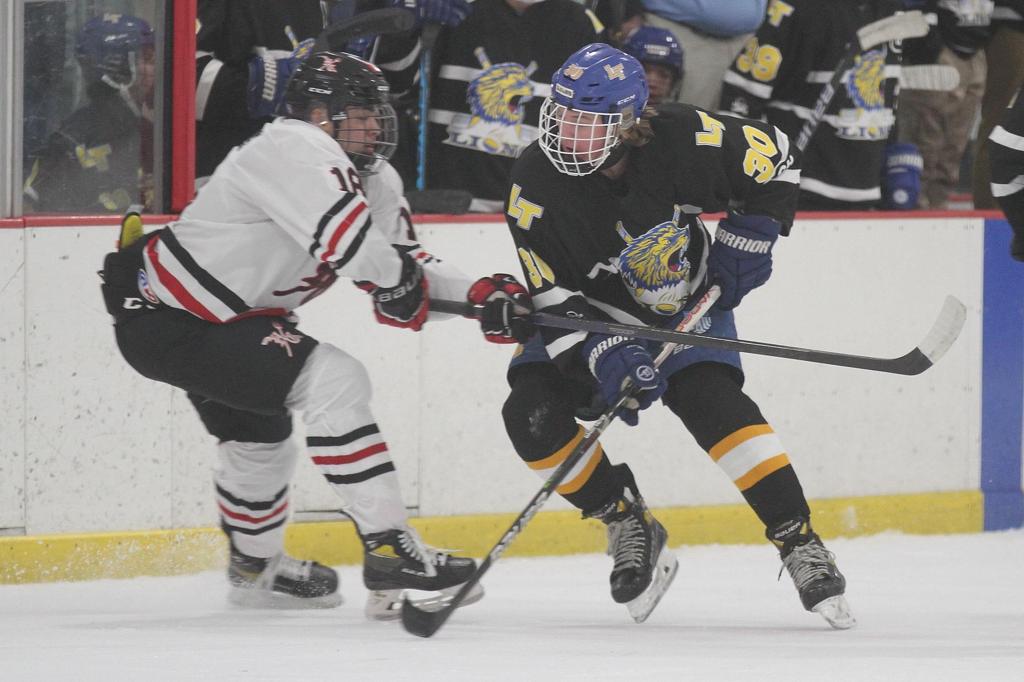 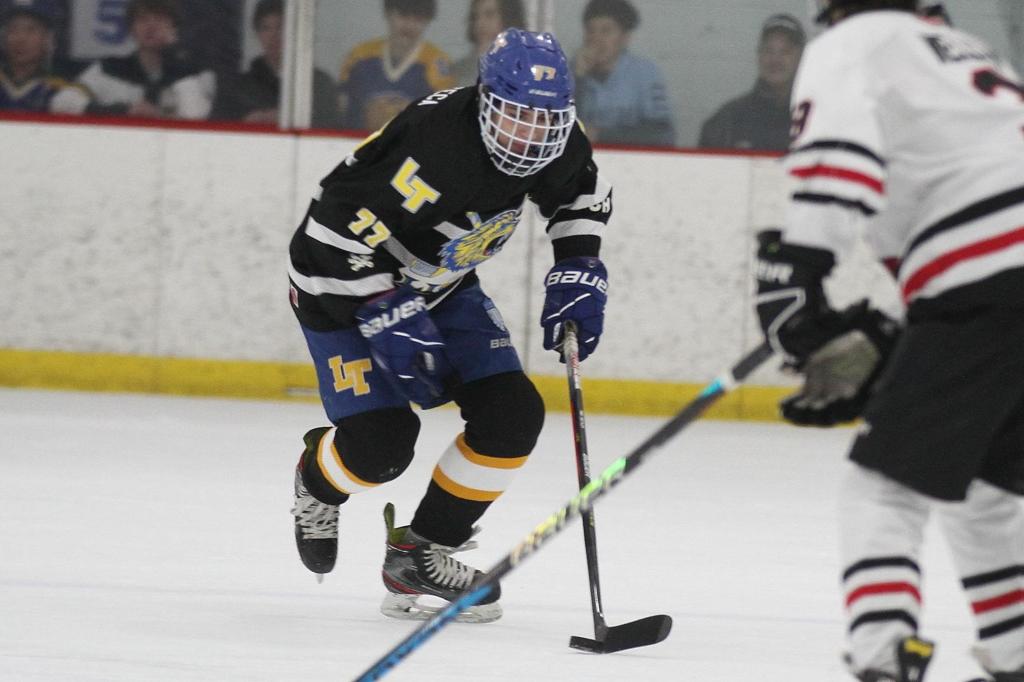 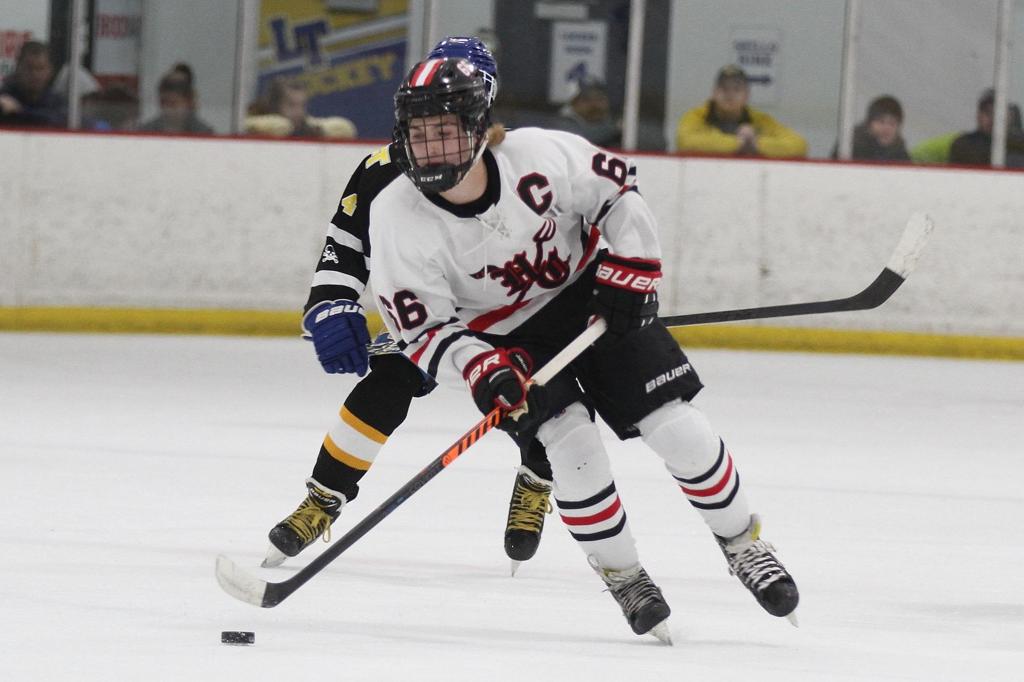 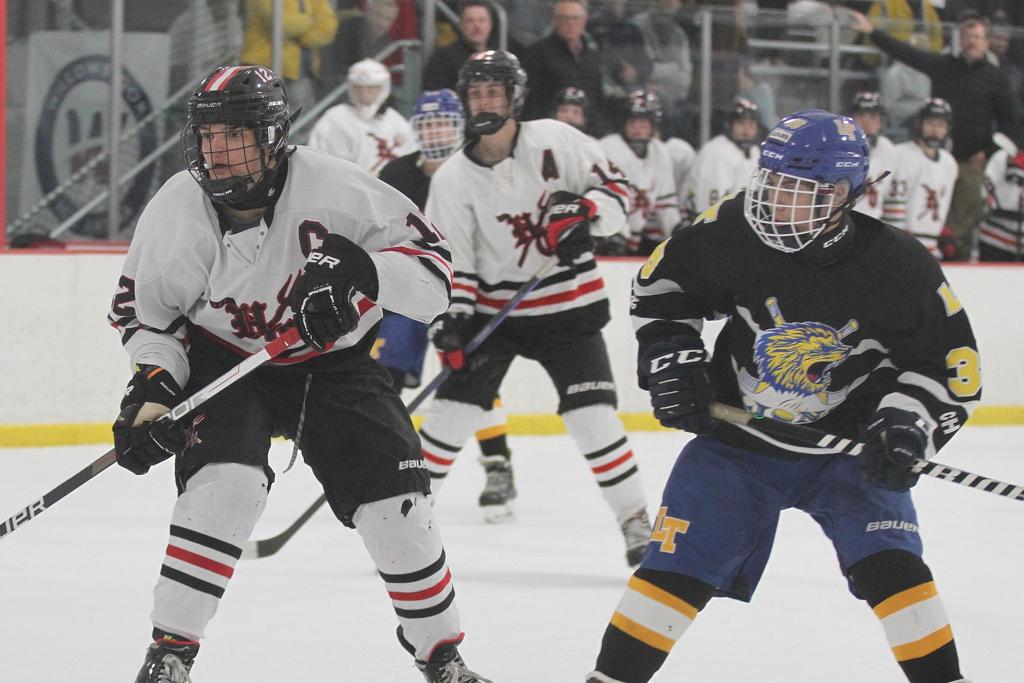 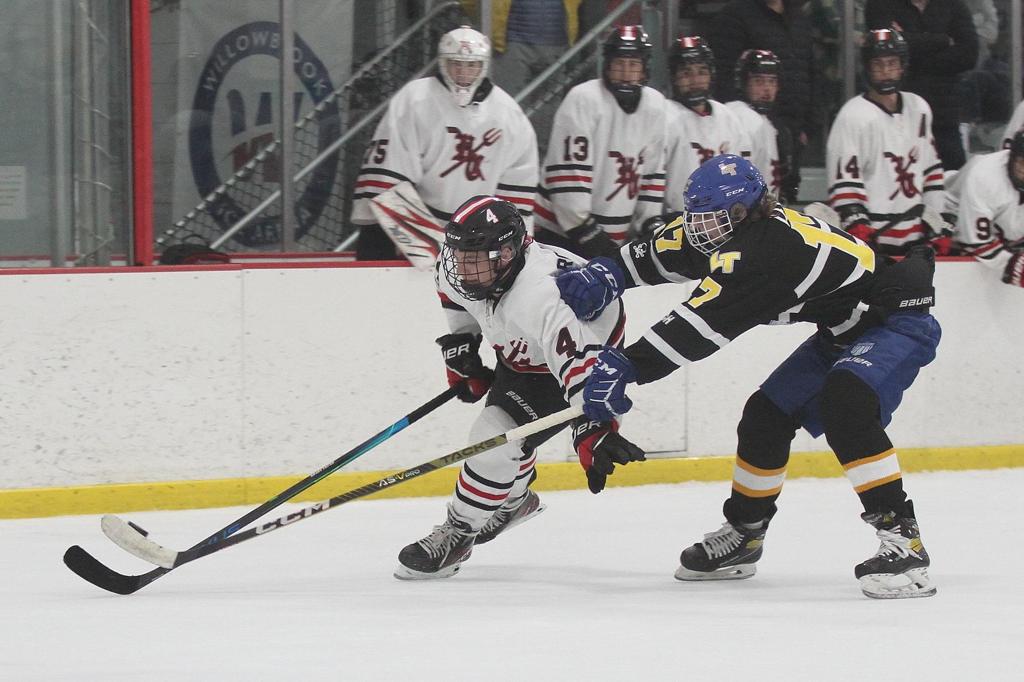 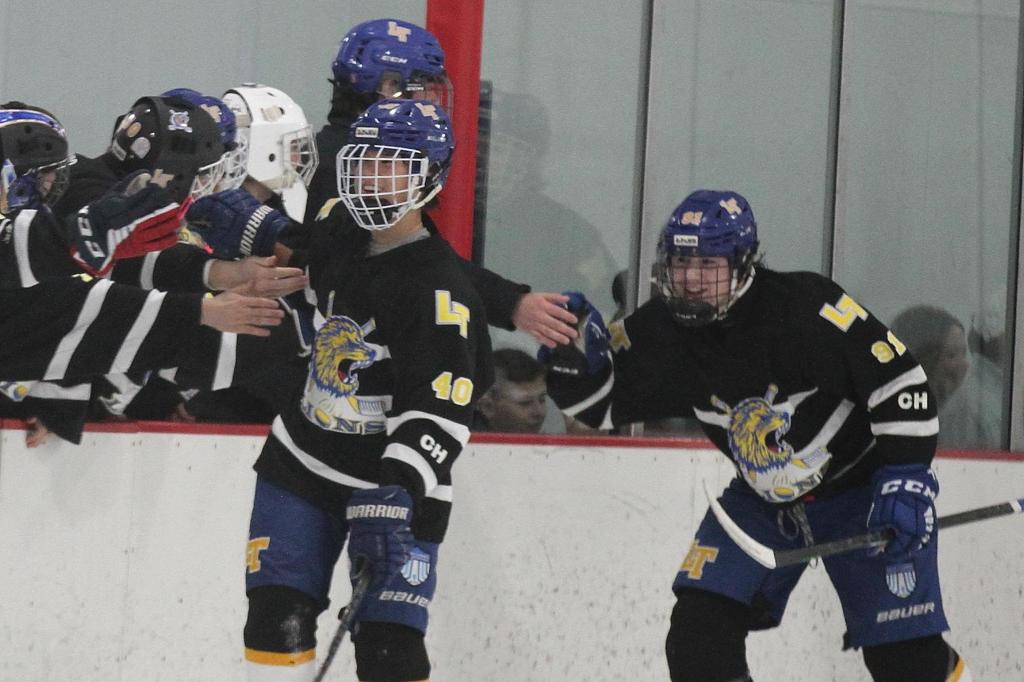 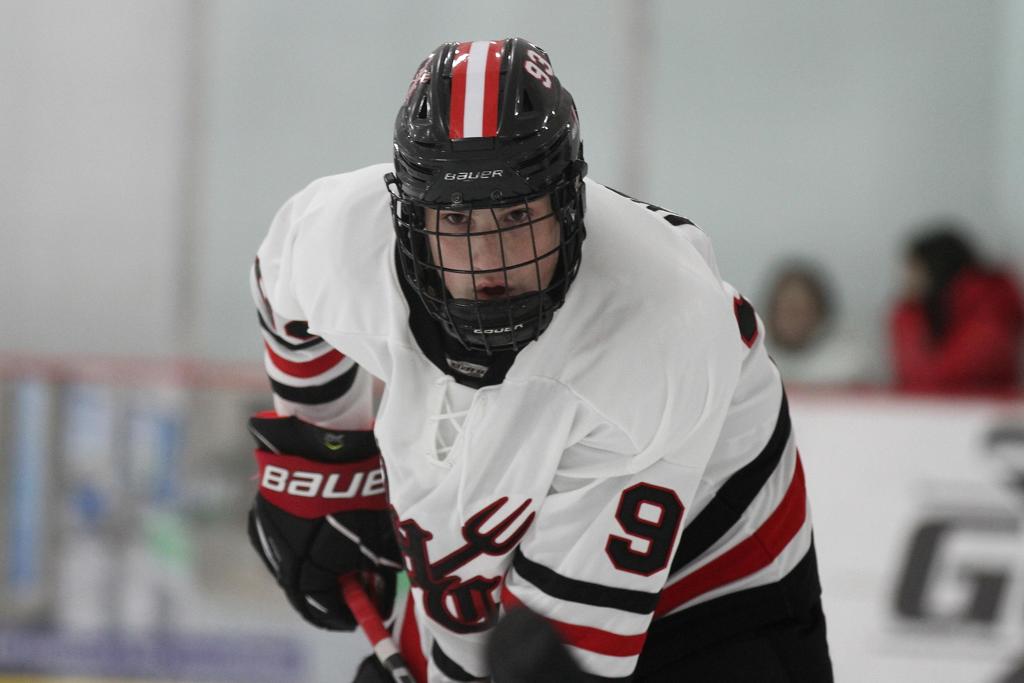