Maine’s Michael Schuyler had a plan going into his shootout attempt against Waubonsie/Metea on Friday, but not in the strictest sense of the word.

“Just go in right at the goalie and see what happens,” Schuyler said. “Last time I was in a shootout I missed against Evanston so I had to bury it this time around.”

“I feel great for Michael Schuyler,” Maine coach Greg Mrofcza said. “He had a goal and an assist tonight, and then he got the game-winner. We told him in practice that it was going to be him if it goes to a shootout. He just has great hands. We’re really happy for him.”

Maine ultimately earned a 48-33 edge in shots on its home ice. Waubonsie took a 2-1 lead in the second period but Maine answered quickly with a three-goal scoring binge in a span of two minutes and 20 seconds to grab a 4-2 lead after two periods.

Waubonsie/Metea answered with high energy to start the third period and struck twice, tying the game on a Ryan Burk goal that ultimately sent the game to overtime.

A scoreless five minutes of three-on-three hockey ensued before Besenjak’s save and Schuyler’s shootout goal secured the win for Maine.

“I like that we kept our heads up, and we never really fell out of it,” Besenjak said. “I feel like I our body language and the way we acted when we were down was really good. You know, no one let anyone get down. Everyone kept their heads up. We kept at it and we’re a team that doesn’t quit.”

A similar refrain came from Waubonsie/Metea despite the loss. Trailing by two goals at intermission, coach Jeremy Dombro had a simple request, and his boys responded.

“I told them in the locker room to have some pride, and they played a really good third period,” Dombro said. “You're down two against a good hockey team and you managed to get a (league) point out of it. We just have to find a way to play like we played in the third period from the get-go, so now it’s just about consistency.”

The game’s first goal came when Waubonsie’s James Naffziger intercepted a puck in Maine’s defensive zone and buried it from the high slot at the 12:19 mark of the first period. Schuyler answered less than three minutes later to make it 1-1, on assists from Dean Andrews and Ben Kappel.

Waubonsie scored during the third of its power plays on a Ryan Burk shot from the left side, on assists from Evan Ziegler and Kyler Campfield, with 8:11 remaining in the second period.

Mrofcza wasn’t thrilled with the one-sided penalty balance in the game but applauded his boys in negotiating it.

“Our penalty kill is something we work on a lot. It’s sharp, statistically, it's pretty good, and we’re pretty confident in our special teams,” Mrofcza said. “And the (PK) goal we gave up wasn’t from a prime scoring area. So that wasn’t a high chance and sometimes that happens.”

Maine answered with a barrage of goals, the first coming only 16 seconds after Burk gave Waubonsie its 2-1 lead.

Andrews tied the game 2-2 at 7:55 of the second period on a 2-on-1 feed at the right post from Schuyler, with Kappel also assisting on the play. A minute later it was Peter Koepke scoring on assists to Ryan Belz and Ryan Freytes, and one minute after that it was 4-2 when Jake Salvatore streaked in up the right side and buried an unassisted goal at the 5:35 mark of the period.

“I really liked how we moved the puck,” Schuyler said. “You know I thought we were all coming together we were all clicking. Unfortunately, we got some penalties but you know, you’ve just got to bounce back from that and our PK is pretty good.”

Besenjak had a great view of his side’s 3-goal outburst and was not surprised by it. Maine has now scored 55 goals through 10 league games and sits atop the standings as the only unbeaten team in league play.

“We have so much depth on our team and every guy can contribute,” Besenjak said. “We're a scary team offensively with a lot of guys that can score. Every line plays well with each other, they know what they're doing, and I'm really confident in all of them.”

Waubonsie sat behind the proverbial 8-ball at intermission.

“We let up those (three) goals and kind of got caught flat-footed,” Campfield said. “After the intermission, we worked on coming out hard those first two shifts and just building on that. Then we got the momentum after that first goal.”

Campfield and his boys cut the Maine lead to 4-3 when Joe Pijanowski took an Owen Cope feed and swooped in up the left side, burying his shot up high at the 13:42 mark of the third. That’s where it stood until the 8:47 mark, when Burk tied the game with his second goal of the day, with assists to Pijanowski and Ziegler.

Dombro had a quick reply when asked what his team did well in the third period.

“We skated,” he said. “We finally actually moved our feet and we simplified things, and we found guys. We took some shots that we had been passing up earlier, trying to find something cute, something pretty. And then it was just pride, effort, and keeping things simple.”

“Last year we had fifteen seniors and it was more of the stuff off the ice, like coming to the rink ready to play, an hour before you’ve got to be focused, and then come in and play fifty-one minutes hard,” Canfield said. “You have to play every single shift hard. That’s a work-in-progress but as the season goes on we’ll be more and more ready. By March, hopefully, we’ll be ready to go.”

The final nine minutes of regulation of a 4-4 hockey game were predictably wild. Schuyler buried an apparent go-ahead goal at 5:57 but was instead whistled for goalie interference and the goal was waved off. Maine killed off the penalty and the final 5 minutes of regulation were adrenaline-fueled.

Ziegler hit a post at 4:35 and Waubonsie goalie Andrew Fichtel gloved a Schuyler shot at 3:28 on a Maine 2-on-1. Fichtel turned away shots from Belz and Nick Gournis, and gloved a Kappel shot with 1:03 remaining.

Waubonsie’s Braden Ondrus nearly swatted a deflection out of the air and into the net in the waning moments of regulation but the puck went wide.

In the overtime, Maine’s Salvatore and Belz found shots, as did Pijanowski for Waubonsie, before the shootout arrived and Besenjak and Schuyler rode up on their white horses to save the day for Maine.

“I was proud that even though we gave up a tying goal, we went and fought right back,” Mrofcza said. “I thought we controlled the pace of play and there were stretches in the second period that I thought we owned.

“Jake Salvatore was just a freight train today. He had four or five rushes up the ice and you just don’t want to get in front of him, at something like 6-foot-2 and two hundred pounds. I was also really happy with Jack Koteles. (Waubonsie/Metea) had four goals and he wasn’t on the ice for any of those four goals and he’s just a really solid, heady player for us.”

An unbeaten record through 10 league games is a fast start for a Maine team that won the West title last year.

“I think coming into this season, we still felt that we were relevant in our league and we felt that we were relevant in the state,” Mrofcza said. We've been fortunate enough to play pretty well so far in league play but last I checked they weren't handing out trophies in October. There’s a lot of season left and we’ve played in a lot of close games. But I’m happy that they’re jelling and we’ve been able to institute some things in a team concept that we didn’t think we’d be able to do for a month or two, and they’re playing very confidently.”

Dombro was encouraged by the way Waubonsie/Metea showed character in fighting back to a 4-4 draw in the third period.

“There's a lot of disappointment and frustration in there,” Dombro said, gesturing towards the Waubonsie locker room after the game. “So just trying to get them to realize that after the second I was frustrated but after the game, not as much. Now we have to turn around and play Glenbard tomorrow, so let that frustration fuel you.”

There was no shortage of quality contributions from Dombro’s side, from Fichtel’s big saves down the stretch to Burk’s two goals, and everything in between.

“(Burk) has been great, (Naffziger) gets a big goal tonight and he had a really good game — good in our own end, getting pucks out,” Dombro said. “He’s a high guy on our forecheck and he picks off a pass and puts it in net. Ziegler has had it going and he’s just an all-around solid hockey player, and defensively we’re leaning on Campfield, (Luke) Peters and some of our upperclassmen. They’ve logged a lot of minutes. I thought our goaltending was solid tonight. We gave up too many odd-man rushes and we were too sloppy in the first two periods.”

Campfield appreciated the fight in the dog his side showed on Friday.

“I liked how we didn’t kind of turtle-up and take a beating in the third period,” he said. “We pushed back and if we had one more lucky bounce we take the two (league) points. We can come back from being down two goals. We’ve done it before so we’ve shown the ability to come back.” 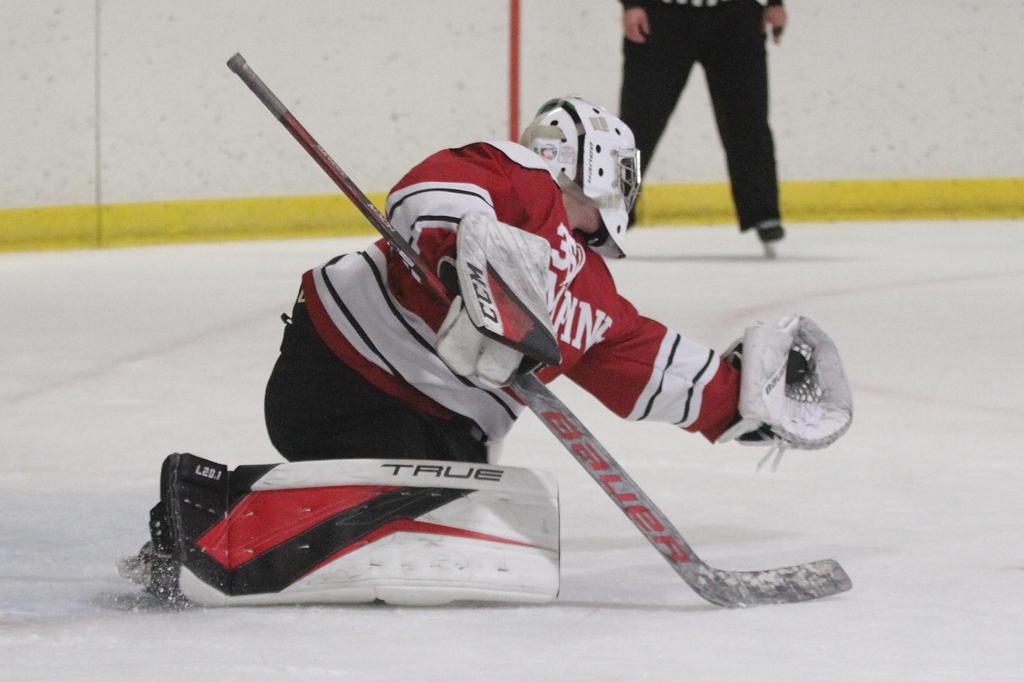 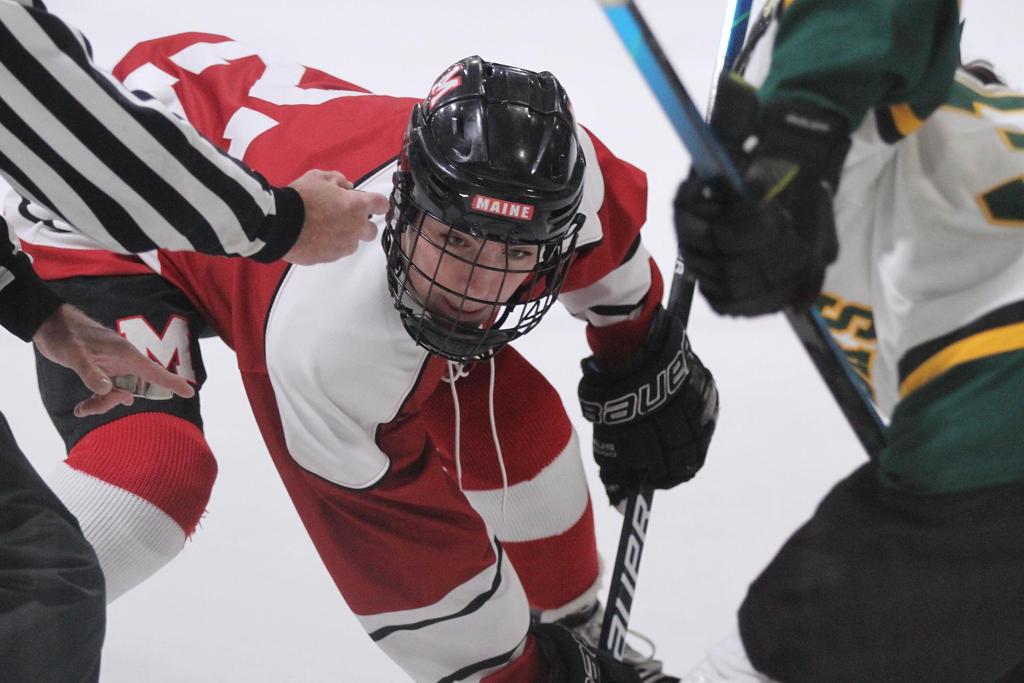 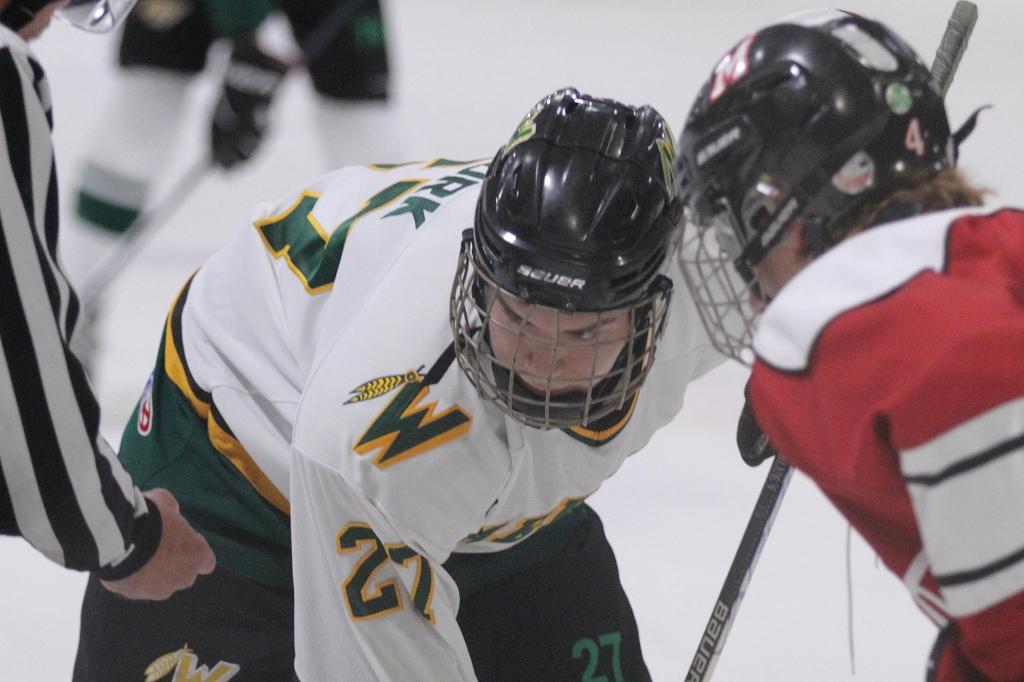 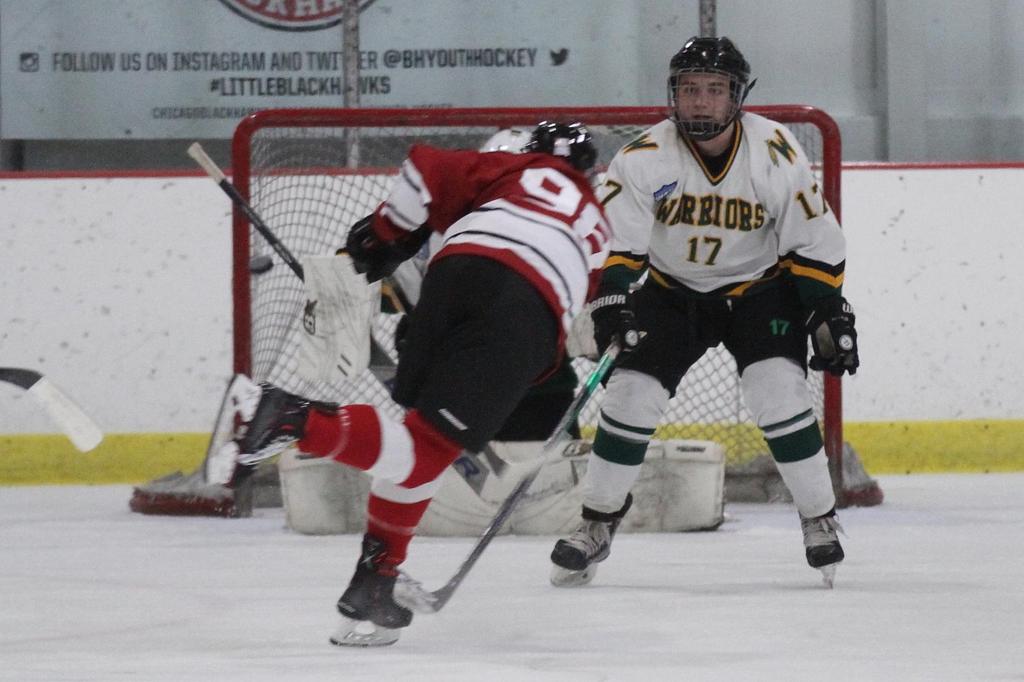 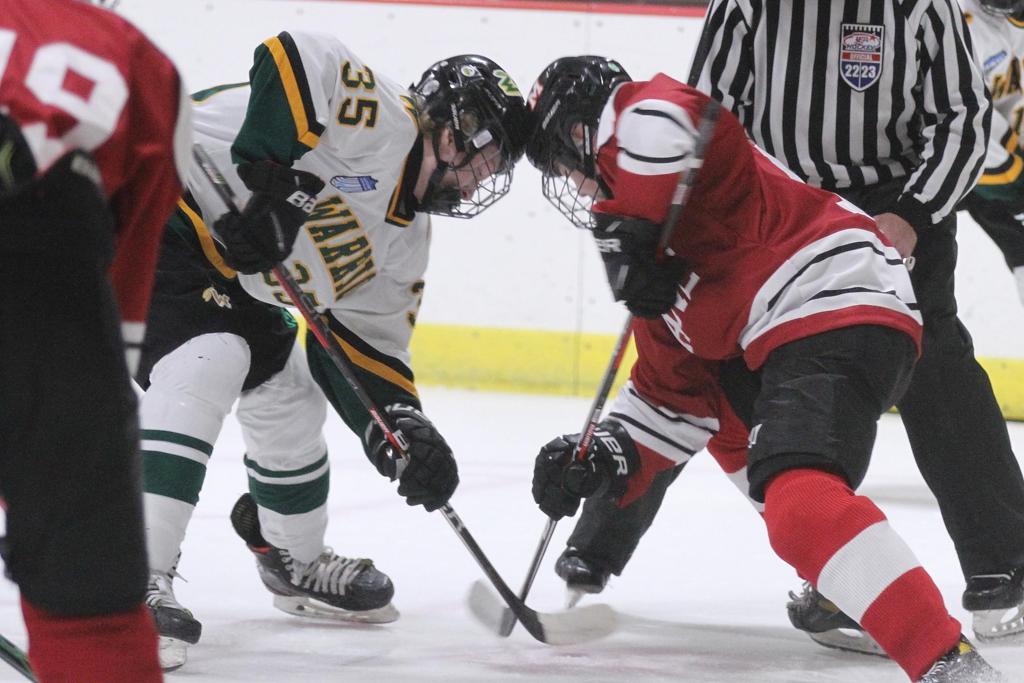 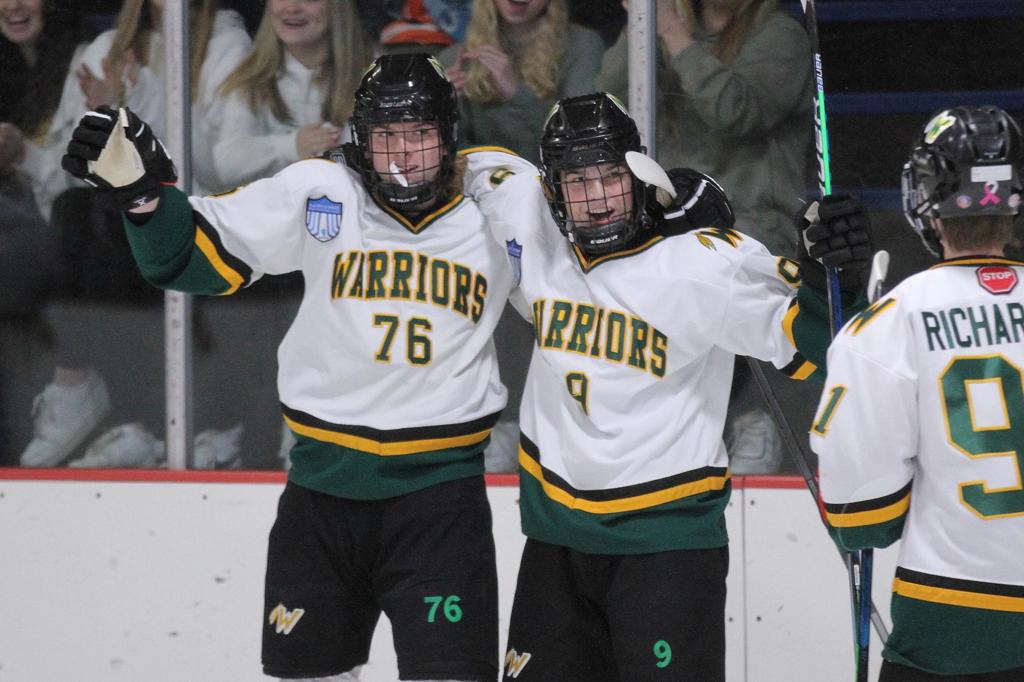 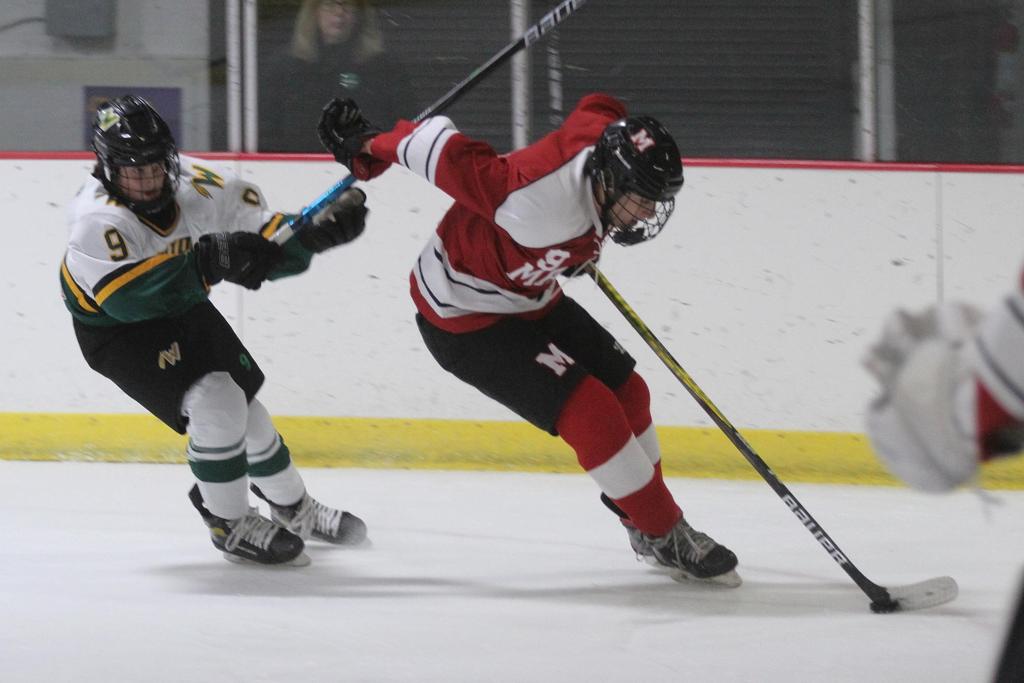 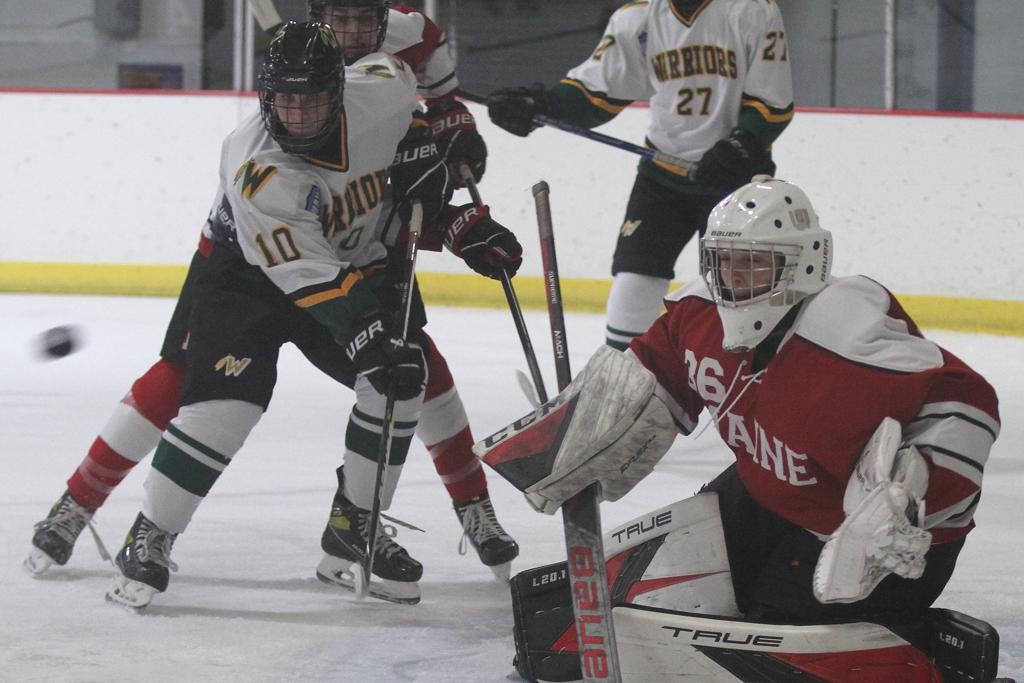 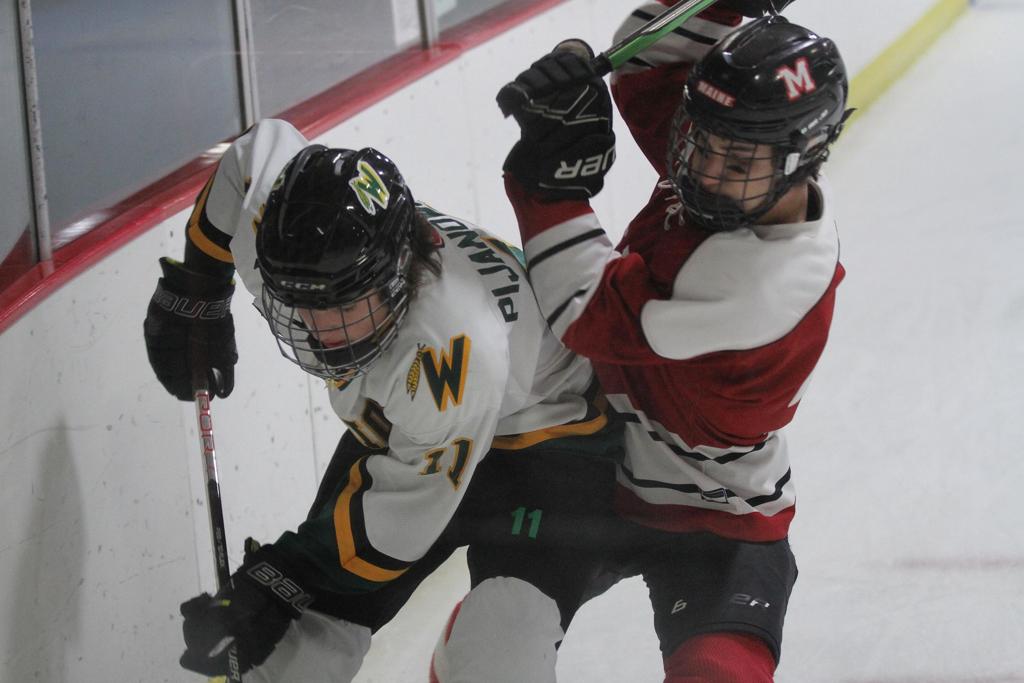